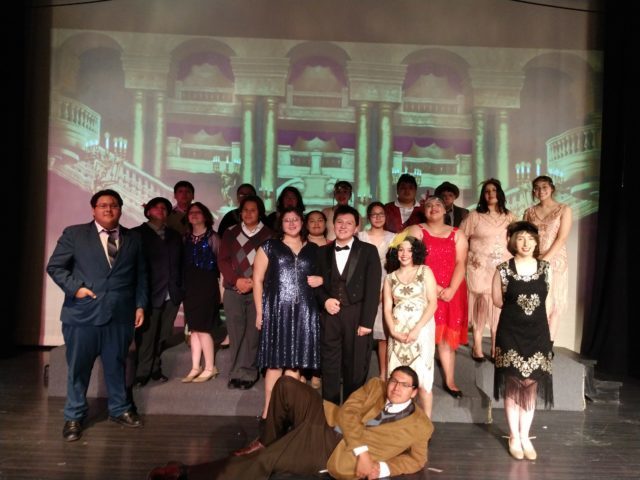 Singin' In The Rain is a Smash!

On May 10-12, the WPS Fine Arts Department put on an outstanding performance of Arthur Freed’s 1929 hit Singin’ in the Rain. The made-for-stage musical was turned into a box office bo-fo (to quote Dora Bailey) in 1952 starring Gene Kelly and Debbie Reynolds. Broadway and Hollywood ain’t got nothing on the stars at WPS (I know bad grammar but “don’t have anything” just doesn’t flow so forgive me this one gaffe). The journey started back in December of 2019 and finally culminated in a wonderful show. Toby Bassette, starring as Don Lockwood, stole the show and made his final performance on the WPS stage simply his best! Gitana McClelland made her debut in musical theater as Lina Lockwook the annoying antagonist. We brought back 2018 graduate, Laura Neff, for the role of Kathy Seldon. To round out the leading roles, was freshman Devin Houghton, a new “Broadway hoofer,” as Don Lockwood’s Vaudeville pal Cosmo Brown. The supporting cast was equally impressive (see the list below). The show was under the thoughtful and experienced guide of Mrs. Dianna Sprirk who ensured every detail was at its best. Mr. Jared Garthoff and Mrs. Stacy Brasch rounded out the directing team as tech and stage managers. A special shout out to Mr. and Mrs. Mayo and their classes for set design and goodies for after the performances. Another thank-you to Mr. Bonneau and his class for the program and to Mr. Austin Bales for the backdrop designs. It truly took a village to pull this off. It was nearly 18 months in the making, but it was well worth the wait.

Cast of Singin’ in the Rain